The Empress, Reversed, or How I stopped singing for a long time

Welcome back, my dears! Thanks for continuing to indulge me in my protracted trip down memory lane. I’ve been promising to talk about those years when my creative voice was silenced into apparent oblivion, but kept procrastinating because, well, it’s not the easiest thing to talk about.

These were the years where it looked like I was headed towards a promising career in medicine, or laboratory science, much to the pride of my parents. These were also years where I didn’t write one poem, and my guitar sat in its case, untouched. I didn’t sing. I didn’t even listen to music. When I wasn’t working or studying, I was numbing myself with TV. How did I allow myself to get there? 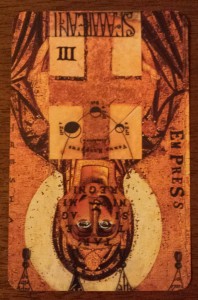 It started gradually. I went away to Knox College, a small, beautiful liberal arts college in Galesburg, IL, one month after turning 17 years old. The standards were high: most of the less than 1200 students had graduated in the top 5% of their High School class. I had won a writing scholarship during the admissions process, and enrolled with plans to do a double major in Creative Writing, and Music.

Up until then, my natural aptitudes and test-taking abilities had allowed me to do “well-enough” without really applying myself. By “well-enough”, I mean I graduated second from the top in my small high school class. But I had never really studied music theory in depth, allowing my ear and good memory to guide me as I taught myself guitar, and felt a little intimidated about writing in English, which is my second language. These were things I was passionate about, but never really had a chance to formally develop.

I was undisciplined, and was so afraid to sound stupid when I wrote that I ended up not finishing or turning in most of my assignments, because they weren’t “good enough”, in my opinion. The one thing I felt I was doing right was singing with the Choir, and the Chamber Singers. This is also what my transcript showed, and so I was in academic probation by the end of my second quarter.

All throughout my childhood and teenager years, my spirituality and “religion” was very loosely regulated: I lived with my mom, who at the time was a lapse catholic, and so after going to a Mennonite grade school from 2nd through 6th grade, I didn’t really go to church regularly. When I went to college, I decided I would really explore my religious and spiritual side, and started attending Newman Club and IVCF meetings, as well as regular mass. And the more time I spent with Christians, the more out of place I started to feel. How could a God that is Love condemn even one child of his creation to an eternity in Hell? Surely, God should have a greater capacity for Compassion and Mercy than I, a mere mortal, shouldn’t he?

Then I took a Philosophy class near the end of my first year, and started learning more about other religions, and felt like in all of them there were things that resonated as true within me: Love, Kindness, Compassion. And then I saw that even though all religions had these things in common, most of them also had judgmental and condemning aspects, absolutely jarring to what I felt to be true. Which one was true? As invested as I was in always finding THE right answer, I thought they couldn’t ALL be true. So I started to think they might all be wrong. After all, what proof was there, other than anecdotal?

I lost my faith in the Creator, both the Divine, and the archetype within me.

The only thing that seemed consistently true and infallible to me was Science and Math. Two plus two always equals four. The sky appears red near dusk because the rays of the sun are bent by the atmosphere and only the longer wavelengths of light get reflected back at us. There were right answers, and wrong answers, and this pleased my need for absolute certainty, so I went into full skeptic mode.

When I told my parents I had decided to become a medical doctor, my mom was so happy she nearly wept. She still had the belief that having the M.D. initials after your name automatically brought respect and wealth (Puerto Rico was a few years behind on the increased corporatization of the healthcare system and predatory practices by insurance companies) and thought I’d be set for life.

With such an ambitious goal, and very defined steps towards its achievement, I invested all my energy into it. I was working 38 hours a week as an optician to support me and my husband at the time, and enrolled for 17-19 credits at UW-Milwaukee every semester in order to finish my degree in a timely fashion. I slept 6 hours a night when I was lucky. There was no time for singing.

And so went the next 5 years. After a year finally cultivating some study habits with a very structured curriculum, and tests where there was always just the one right answer for every question, I went from academic probation to consistently making the Dean’s list.

I was loving learning all that I could about human pathophysiology, genetics, biochemistry, really absorbing all that I could about how our bodies work. But as I learned more about hospital administrators and insurance companies, the prospect of becoming yet another overworked and underappreciated drone in that bloated maze started to appear more dreadful than appealing.

At around this time, I took an Immunology class with a professor with a very strong personality. He was the only professor to have a serious essay component to his exams, and it was by far one of the most challenging classes in the curriculum. I loved the challenge, and did well in it. Doing some independent research was a requirement for my Biomedical Science degree, and so I decided to work in his lab.

This professor saw my potential, and took me under his wing. He saw how I kept putting off completing my med school applications, and suggested that I go for a Master’s instead, or even a PhD. He helped me secure a position as a teaching assistant to help with grad school when I sabotaged my own med school application. Each med school receives approximately 6,000 applications, 4,000 of which are well-qualified, for 200 spots which are filled on a first-come, first-serve basis.  By the time I submitted my application, on the final deadline, the classes were long full.

So I started grad school, and the lab took over my life. I got a taste of what being a research scientist at an academic institution would be like. I was good at it. My professor said, when I told him I was quitting, that I was the best scientific writer he had trained so far, and that if I ever wanted to come back to science, he would vouch for me. But that I had to be serious about it. And that was the problem.

At first, the work was interesting and exciting, but after the novelty wore off, it grew very boring. Long nights in a basement lab, running timed experiments where measurements had to be taken periodically: Every 30 minutes, or every hour, or every 2 hours, for 24 hours, or 48 hours. Doing statistical analysis of the data. Departmental politics. And the ever-present stress of procuring funding. It was soul-sucking for me. I was miserable.

And it was then that, searching for my soul, I pulled that old black case out from between the computer desk and the wall. The dust was thick on it, but  the guitar inside still had all 6 strings. My fingers had lost their strength for making chord shapes, though, it was frustrating to feel how much the muscle memory had faded, how hard it was, when it once had been like breathing. It had been my solace and my joy.

And I cried, because I realized that somewhere along the way, I had lost sight of who I was, and forgotten how to be me, happy.

This entry was posted in Jen's Story.

« From Reversed Queen of Wands to Queen of Cups, part 1.
Introducing… My writing deck. »